Despite skyrocketing healthcare costs, President Trump is committed to protecting the 30 million or so Americans with rare diseases and ensuring timely, affordable access to lifesaving treatments, the nation’s highest-ranking health official said.

“We have to think about how our financing system can protect those with serious and rare illnesses. When successful therapies are developed, they can be extremely expensive, so we need to ensure that Americans who suffer from rare diseases have ways to finance their care,” said Alex Azar, secretary of the U.S. Department of Health and Human Services (HHS). “In part, that means keeping the promise President Trump has made to Americans with pre-existing conditions: a guarantee we will maintain at the federal level,” he added. “That’s not changing. We want a system that works — and protects what works.”

“Medicare and private insurance have made it possible for Americans to receive the most cutting-edge treatments,” said Azar, the first U.S. cabinet secretary to address a NORD summit. “Securing longer, happier, healthier lives is the fundamental goal the president has for our healthcare system — especially for patients suffering from rare diseases.”

He added: “President Trump has a particular vision for healthcare that puts you, the patient, at the center and treats you like a human being, and not like a number. Such a system will provide you with the affordability you need, the control you want, and the quality you deserve.”

A new approach to rare diseases

NORD, a coalition of 280 patient advocacy organizations, is a longtime supporter of the Orphan Drug Act of 1983. This controversial law gives pharmaceutical companies tax and other incentives to develop therapies for rare diseases — which, according to the FDA, are those affecting fewer than 200,000 Americans. Of the 7,000 or so known rare diseases, roughly 90% still lack FDA-approved treatments, and more than half of those affected are children.

As secretary of HHS, Azar oversees a fiscal 2019 budget of $1.2 trillion. The agency administers 115 programs across its 11 operating divisions, including the Centers for Medicare and Medicaid Services, the FDA, the National Institutes of Health (NIH), the Centers for Disease Control and Prevention, and the Health Resources and Services Administration. 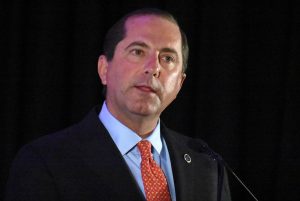 In his 17-minute speech, Azar cited sickle cell disease (SCD) as a prime example of Trump’s approach to the millions of people whose conditions are considered rare.

“We believe we can make a meaningful impact quite soon on this terrible disease,” he said, noting that the illness plagues about 100,000 Americans — particularly blacks and Hispanics — and causes excruciating pain as well as infections, lung damage, blindness, depression, and heart and kidney failure.

“While sickle cell disease has been neglected for far too long, today there are many, many reasons for hope,” Azar said. “In fact, it is one of the single most promising areas for biomedical research, and the Trump administration has made the disease a top priority. At HHS, we’ve set a goal of extending the lives of Americans with sickle cell disease by 10 years within 10 years.”

To that end, Trump late last year signed into law a bipartisan bill that reauthorizes a current SCD prevention and treatment program for nearly $5 million each year over the next five years. The Sickle Cell Disease and Other Heritable Blood Disorders Research, Surveillance, Prevention and Treatment Act of 2018 had been co-sponsored by Sens. Cory Booker (D-New Jersey) and Tim Scott (R-South Carolina).

Azar: ‘The cures are coming’

Azar, 52, assumed leadership of HHS in January 2018 following his Senate confirmation. Before that, he headed the U.S. division of Eli Lilly & Company from 2012 to 2017. A longtime lobbyist for the pharmaceutical industry, he noted that 40 therapies to help manage SCD-related pain are currently being tested in clinical trials.

“Market failures have led some diseases to be neglected for far too long,” he said. “Government has a major role to play in helping to finance drugs for rare and neglected diseases. Companies have little incentive to develop a drug that may benefit only a small percentage of the population.” The NIH announced on Oct. 23 plans to invest at least $100 million over the next four years toward developing “affordable, gene-based cures” for both SCD and HIV. The Bill & Melinda Gates Foundation will also put $100 million toward this goal.

Yet that’s only part of the challenge, said Azar. Paying for all these new treatments could be a bigger battle — especially considering the $2.1 million price tag for the recently approved Novartis gene therapy Zolgensma for spinal muscular atrophy.

“Gene therapies have typically carried unprecedented high prices, and the same will likely be true for a cure for sickle cell. Progress must prompt us to think about how we’re going to finance the delivery of these cures,” he said.

“The cures are coming — thank God they are — but when they arrive, we’ve got to be ready to get them to patients who desperately need them,” Azar added. “All of the actors involved — HHS, private payers, innovators, legislators, and patient advocates — need to be thinking now about how to build a system together that can support access to these cures.

“The whole point of a health insurance system like we have is to ensure that if you are struck by a serious illness — let alone one that is rare and highly unlikely — our system is there to care for you.”