A Russian military plane crash near Tetiana Zamorska’s home in Kyiv, Ukraine, was a sign that it was time for her and her family to leave.

The treacherous, 34-hour pilgrimage that ultimately brought the group of eight by car to temporary accommodations in neighboring Poland last month was physically and emotionally difficult, Zamorska recently told BioNews, Inc., the publisher of this website. The journey and transition have been especially challenging for her son Andrii, who has epidermolysis bullosa (EB) and is mostly bedridden because of his fragile, blistering skin. Patients with EB need boxes of backup bandages to treat wounds, heaters to stay warm because of thin skin, and a blender to soften food because of scarring in the mouth and esophagus. Zamorska said that 24/7 care is needed for people with more aggressive forms of EB, such as 19-year-old Andrii, who has severe generalized recessive dystrophic EB.

“Being a stranger is always stressful. But for an EB family to be in a different country with no language with no money, without knowing everything in the country, it’s very difficult,” Zamorska said. “And it’s very difficult to be included in the health system.”

Since settling in Poland, Zamorska, who runs the EB organization Debra Ukraine, has taken calls from at least 15 other families affected by the condition. She has offered them advice about the best routes to escape Ukraine and has sent money for purchasing gas, medicine, and bandages.

Because of Russia’s invasion of Ukraine, thousands of rare disease patients like Andrii have been forced to flee into neighboring countries. These refugees of war, many of them children, are arriving in need of medicine and medical equipment that they either had to leave behind, or was destroyed by Russians who have targeted Ukraine’s medical infrastructure and civilian populations.

According to the World Health Organization’s Surveillance System for Attacks on Health Care, as of April 25 there have been 164 attacks that have affected facilities, transport, personnel, warehouses, medical supplies, and patients. Those strikes have resulted in more than 70 deaths at those facilities since Russia’s Feb. 24 invasion.

As refugees cross the borders into Poland, Hungary, Moldova, Romania, Slovakia, and Belarus, a number of nonprofit organizations are offering help to those with rare conditions who need specialized care.

In a March 16 statement, EURORDIS said it was focused on fulfilling immediate needs of the rare disease community, such as bandages for EB patients and respiratory therapy for those with cystic fibrosis. EURORDIS also said it will advocate for specific needs among its stakeholder networks.

“Today, Ukraine is under siege, and it is our shared responsibility to ensure that no person living with a rare disease, whose conditions are often debilitating or need frequent and complex medical attention, is left behind,” said Terkel Andersen, president of the board of EURORDIS. “We need to be pragmatic in our response to this humanitarian emergency situation while already preparing medium- and long-term actions.”

Some of the challenges EURORDIS outlined are providing complex care to patients, expediting relief and aid, fast-tracking rare disease patients through borders, and registering patients in the European Reference Networks. That European Commission program allows providers seeing patients with rare or complex diseases to collaborate to diagnose and treat these conditions.

The organization is raising money to respond to the needs of rare disease patients and also set up an online resource center with links and contact information about how to leave Ukraine and how to connect with rare disease groups in nearby countries. It also partnered with airbnb.org to provide free short-term housing to families with rare diseases.

The American Red Cross has contributed $12 million toward crisis relief efforts. In a press release outlining the healthcare assistance rendered, it noted that Red Cross teams have assisted with the evacuation of people with disabilities.

Direct Relief reported that it is working directly with the Ukrainian health ministry and “other on-the-ground partners” to provide needed aid. As of April 27, the group has shipped more than 58.3 million doses of medicines to the country, and given more than $187 million in medical aid.

Under a law signed by Polish President Andrzej Duda on March 14, Ukrainians can stay legally in Poland for 18 months. That law also makes it easier for Ukrainians to receive a Polish personal identification, or PESEL, number and access benefits that include healthcare and education.

On paper that is accurate, Zamorska said, however, her family has received no social payments yet. Being in a foreign country, having no money, and speaking a different language, they don’t have many places to turn for help.

“It’s very important to help families to stay alive for two to three months until they have accommodation or until they have this small, but still some, financial social payment,” Zamorska said.

The European Reference Network for Hereditary Metabolic Disorders (MetabERN) has offered its services to the Ukrainian refugee population. MetabERNs website lists a series of metabolic centers in Poland, Hungary, Romania, Slovakia, and Lithuania. 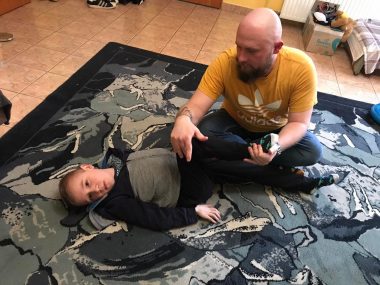 Nazar is one of the boys being assisted by Fundacja Parent Project Muscular Dystrophy in Poland. (Photo courtesy of Agnieszka Volkov)

The Columbus Children’s Foundation (CCF) and CureDuchenne are collaborating to raise money for a group in Gdansk, Poland, called Fundacja (Foundation) Parent Project Muscular Dystrophy, which is giving financial and medical assistance to boys with Duchenne muscular dystrophy (DMD) fleeing Ukraine. As of late April, the two organizations report having raised $17,500 for Parent Project. The Gdansk group is not affiliated with Parent Project Muscular Dystrophy, established in 1994 by its president and CEO Pat Furlong, whose two sons had DMD, and is based in Washington, D.C.

According to Agnieszka Volkov, one of the three founders of Fundacja Parent Project and a DMD parent, the organization is helping care for three families affected by the disease, including procuring wheelchairs, physical therapy, and Calcort, a steroid used to treat inflammation in DMD. The organization also helped transport one family with DMD from eastern Poland to the capital Warsaw and on to Paris, where it is paying for hotel accommodations.

CCF is leveraging its connection with the Bróndo Hospital in Warsaw, Poland, and other nonprofits in that country to help continue care and treatments for complex rare disease cases.

“As a native of Poland, I know firsthand the urgent need to ensure Ukrainian refugee children with ultra-rare diseases and their families receive the specialized help they need to survive in unprecedented circumstances,” Kyrstof Bankiewicz, CEO of CFF, said in a statement on the organization’s website.

Its sister foundation in Spain, Fundación Columbus, launched a fundraiser to assist two charities in Poland in helping rare disease patients: The National Forum for the Treatment of Rare Diseases, which provides special food and medicine for Ukrainian refugees in Poland and those still living in Ukraine, and the Institute of Mother and Child, which is focusing on children with rare metabolic disorders. According to Blanca Garín Alapont, trustee of the Columbus foundation, an initial €5,000 ($5,256) has been sent to the Institute of Mother and Child and it is hoping to raise €50,000 (nearly $52,562) to feed for three months 18 children with a rare disorder called phenylketonuria, a metabolic disease that results in the damaging buildup of phenylalanine, an amino acid.

The Healthcare Education Institute has been helping rare disease patients in Ukraine find faster transportation across the border, organizing medical care, providing treatments to hospitals in Ukraine, and coordinating with the Polish government and various aid organizations. Its site includes links to websites that will give patients with immunodeficiency disorders and rare diseases more information and contact details.

Debra International, a support and advocacy network for epidermolysis bullosa patients, also is asking for donations to provide medical supplies to those affected by the war.

Debra Ukraine, Zamorska’s organization, has received more than €10,000 (about $10,516) in donations from individual donors and larger organizations like Debra International since it started raising money for relief efforts at the end of March.

“I can’t express my gratitude in words to all the people who helped and continue to help in this difficult time,” said Kateryna, a Ukrainian mother who has a 2-year-old with EB and now lives in Poland. “I’m eternally grateful to everyone … for their kind words and great support for me, my rare disease child and my family,” Kateryna said to a Debra Ukraine manager, who translated her responses to questions from BioNews.

Pharmaceutical companies also have responded to the war in Ukraine.

As of mid-April, Biogen, the manufacturer of Spinraza (nusinersen) for spinal muscular atrophy (SMA), said there was no shortage of the treatment in the countries bordering Ukraine.

“We are closely monitoring the situation for any potential supply chain disruptions that could impact patients,” said Allison Parks, associate director of global external communications at Biogen.

Novartis’ gene therapy for SMA, Zolgensma, is not yet approved in Ukraine, but Julie Masow, head of external engagement for the U.S. at Novartis, said children in Ukraine can become eligible through a Global Managed Access Program. The initiative distributes doses of that treatment to places where it is unavailable. If a child is selected randomly to receive treatment the company will ensure access, according to Masow’s written statement to BioNews.

Novartis said it donated $3 million to charities supporting Ukrainian refugees and also has given out cancer and heart treatments, antibiotics and painkillers.

“Novartis will continue to review financial donations and contributions of vital medicines to make sure people in Ukraine receive the crucial support they need now and in the future,” Masow said.

Zamorska hopes the world continues to support Ukrainains, especially those with rare diseases.

“Helping Ukraine to survive to win and helping families with EB to survive is helpful for the whole world and for their countries,” she said.

Editor’s note: Hawken Miller, author of this report, is the son of CureDuchenne founder and CEO Debra Miller.