The nonprofit RARE-X is creating an easily-accessible, centralized data hub for all rare disease patient data that can help researchers answer questions about existing disorders, discover new ones, and work toward finding treatments.

It was spun out of the work that Nicole Boice, founder and chief engagement officer of RARE-X, did with Global Genes. That organization supports those affected by rare diseases through community-building and educational resources. 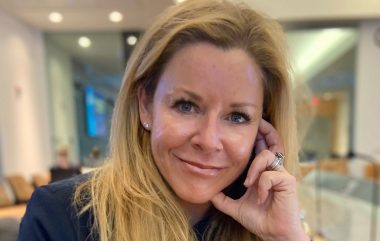 Boice, who has a background in executive sales and marketing for pharmaceutical, media, and technology companies, got her start working in the rare disease space when she met a friend’s baby, Derek, who had an undiagnosed rare disease that took four years to figure out, according to a 2019 article. The family learned there was no cure for Joubert syndrome, a brain development disorder, and Boice launched Global Genes to improve awareness, education, and quality of life for rare disease patients like Derek.

At Global Genes, Boice realized that lack of usable patient data was a hurdle that many biotechnology companies couldn’t surmount. Accessing information such as who was affected by a rare condition, their phenotype (observable characteristics), and disease progression could help biotechs target future therapies and chart their progress in clinical trials.

That was the impetus for Boice to create RARE-X, which became a 501(c)(3) in late 2019. It launched its federated data analysis platform in partnership with the Broad Institute of MIT and Harvard in early 2021.

Ahead of Rare Disease Day on Feb. 28, BioNews, the publisher of this website, spoke to Boice about how RARE-X’s data platform works, its partnership with other organizations to “open up data,” and the role the patient plays in making it all possible.

The interview has been edited for length and clarity.

BioNews (BN): Why did you decide to move on from working at Global Genes to starting RARE-X?

Nicole Boice: It actually was a very organic process. We at Global Genes, over the decade-and-a-half that we were together, started seeing new roles and responsibilities and opportunities in the patient advocacy space. You have an opportunity to kind of become a better partner with biopharma, and to help support and, in many of these really small diseases, de-risk a lot of the early-stage research that needs to happen to attract researchers and manufacturers, etc.

There’s a huge opportunity for patients to take on a greater role in this whole process. What we recognize is Global Genes spent a lot of time trying to help gather and bring educational resources to the table and make connections and support best practices for the patient community. What RARE-X is now doing is kind of spinning out those actual tools in the technology. We’re building the infrastructure … to support patients and be better partners in early research and development.

BN: Define what federated data analysis platform means, and then where you’re at in terms of building that platform.

Boice: The data challenges that we know are hindering progress in rare diseases are that there’s a lot of data silos. The data sits in a lot of different places. It sits within biopharma, in different academic research institutes, and in different registries that patients may be building on their own. The important goal that we’re all striving for now is really to try to open up that data responsibly and mindfully, but allow it to be accessed and be able to be analyzed together with other data that might be sitting in other places.

The promise of it is that you can have data sitting at biopharma and sitting at an academic research institution, and sitting here in the U.S. and sitting overseas, and this data actually doesn’t have to leave where it exists and resides, and that technology today can pull it into a cloud and allow researchers to combine it all in a workspace so it can be analyzed together. It will become the backbone of a research hub that will allow RARE-X to really interconnect disparate data within the RARE-X environment. And then it will allow us to federate other data from outside of the RARE-X environment.

BN: What role does the patient play in this process? And how do you reduce the burden on patients of filling out surveys, doing biospecimens, etc?

Boice: I was talking to a parent of a 2-year-old that has a rare disease. It’s one that causes over 100 seizures a day. And in the midst of all of that she committed to her daughter that she would enroll her in every trial, natural history, and registry that exists for the disease. That totaled 13. It took her, on average, seven hours to complete each one of those and that was all [while] managing her daughter’s condition. I asked her one question: How many of the questions in the surveys that she answered across all of those were the same? And she said about 60%. What if we could give her back 60% of that time? So, everything that we’re focusing on at RARE-X is trying to help support patients, and not having to recreate the wheel or keep answering all these questions over and over. We can provide them with a platform that has 60% of those questions that we know everyone’s going to ask, all the surveys  and have them available. And then you as a patient own that data, and through our novel consents, you say anyone that is working in our disease area I’m going to give access to this 60%.

We believe this is going to de-burden patients. It’s going to give them control over their data and how they share it [and] who they share it with. We as a research platform are obviously including education and everything that goes around it because we know how important it is for patients to participate. We definitely want to create — leveraging new approaches and new technology — a way to help de-burden patients and create less scarcity. The big thing for biopharm is scarcity of patients. And so a lot of what we believe we’re also helping support is alleviating some of that scarcity, for some of the trials and in the research that’s being done.

BN: How will more patient data reduce the time between symptom onset and diagnosis? And how will it lead to more innovation in the biopharmaceutical space?

Boice: We will be coming out with a report pretty soon that’s going to be showcasing that there are well over 9,500 rare diseases and more coming every year. The need to help support patients, regardless of the size of the disease or the disease area, needs to be equitable. The only way that patient advocates in these disease areas are going to attract researchers is if they’re well-coordinated around their data.

If we can get these patient communities started with the appropriate research-ready data that’s robust, we can help them start developing some of the disease characterization models that are so critical … It will then help lead to maybe some biomarkers that are equally as important to manufacturers and researchers. If we can help patients support this early on, we’ll be helping de-risk future investments from researchers and biopharma. We’re trying to create a way to really help patients be drivers and part of the future solution. If we can de-risk up front, there’ll be more interest as researchers become aware of the disease.

Everything that we’re building with RARE-X is to support the efficiency, introductions, and the ability for researchers to identify new patients and new diseases. We’re trying to create a new approach … to accelerate a lot of the infrastructure and early work that we know is so critical, especially in the small, ultra-rare diseases. We’re trying to bring that forward with RARE-X and the platform.